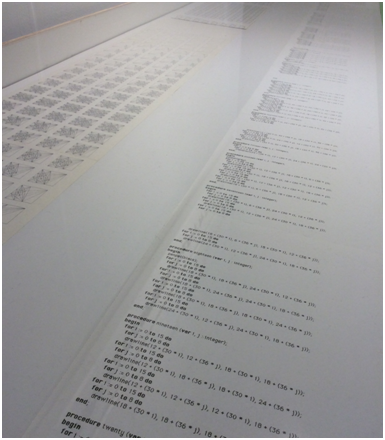 Until Sunday 6 of December Freijo Gallery, presents a Solo Project at Pinta Miami 2015 (Booth J 2), focusing in the work of ELENA ASINS.

In 2006 Asins received the gold medal of Beaux Arts in Spain; in 2011 she was awarded with the National Price of Plastic Arts in Spain.

We show a selection of historic works of this great artist, most of them were already exhibited in the big solo-show the MNCARS (Reina Sofia Museum) made in 2011, Elena Asins "Fragments of Memory".
We will also show her latest work, since 5 years she's been working exclusively on video and music. So we present her latest work "Antigona by Sofocles".

Elena Asins Studied at the School of Fine Arts in Paris, France, The University of Stuttgart, Germany (under professor Max Bense), The Complutense University in Madrid, Spain (Centro de Cálculo), The New York School for Social Research (new York, USA) Columbia University (department of computer science, Computer Art) where she was invited as a Visiting Scholar for the investigation of digital appliance for Plastic Arts (computer Art).

She has done more than 40 individual exhibits around the world, She has written and published ¨Ensayos únicos sobre estética¨ and the poems ¨Poesía experimental” specialize in art and aesthetics in Spain, France, Germany and United States.