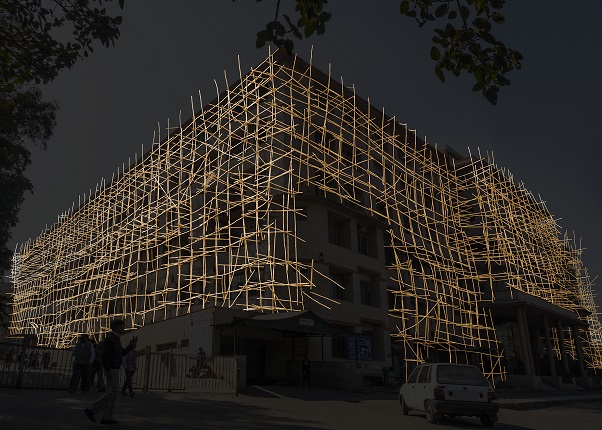 The project 'Paisaje Inacabado' (Unfinished Landscape) by our artist Miguel Ángel García will be inaugurated on January 16th in the space B The Travel Brand in Barcelona. Curated by José Jiménez, the exhibition is based on the relationship that the artist began several years ago with India, as a result of an artistic residence developed in Calcutta, Delhi and Jaipur.

The project proposes a conceptual and visual resignification of the landscape as an expression of the change in the economic, social and political role that a country like India has been experiencing in recent years in the international context. To this end, the artist puts forward the idea of taking bamboo and scaffolding as a metaphor for social support and own resources (raw materials, R+D,...) with which to "build the new social edifice". A subcontinent with 1.3 billion people, plagued by contradictions and inequalities, is the complex scenario in which the project is framed.

In the context of the exhibition, a conference/debate will be held on 31 January on the subject of "Differentiating the image" by José Jiménez, curator of the exhibition, professor of aesthetics, critic, author of a large number of publications, essential references in the world of art, and Joan Fontcuberta, artist, essayist, National Photography Prize winner and one of the most important thinkers in the world of contemporary photography.

In 2019, García has continued his international career with two exhibitions in New York, another two in Delhi, Mauritius and Paris, and last summer he also starred in one of PhotoEspaña's activities (Retrátate !).