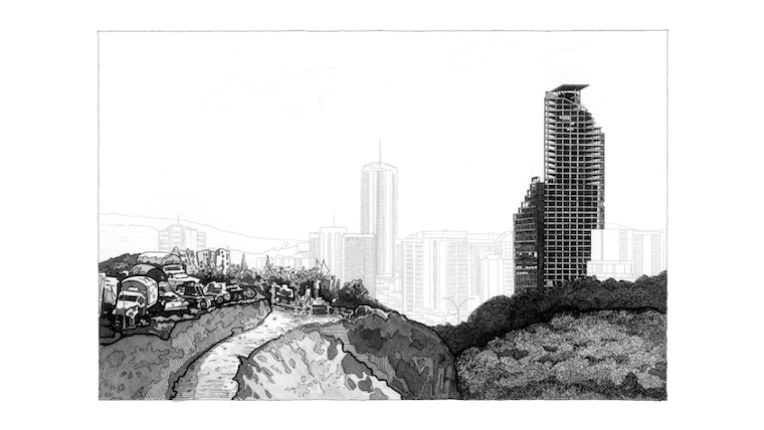 Today, March 11th at 7.00 pm, the opening of the exhibition In the Belly of the Beast, by Ángela Bonadies and Juan José Olavarría will take place at La Virreina Centre de la Imatge, Barcelona.

In 2010, Ángela Bonadies (Caracas, 1970) and Juan José Olavarría (Valencia, Venezuela, 1969) initiated the project entitled David’s Tower. This work in progress is based on the occupation by families and homeless people of the Confinanzas Financial Centre, a 45-floor, 185-metre-high skyscraper that was the third tallest building in Caracas. David’s Tower took its name from its promoter, Venezuelan banker David Brillembourg. Construction of the building began in 1990, as part of an urban plan promoted by businessmen who had amassed fortunes in the stock market boom of the 1980s and intended to create a Wall Street–style boulevard in this area of the capital. However, work was stopped in 1994 because the Confinanzas group went bankrupt as a result of measures introduced by the government of Rafael Caldera. In 2007, with the building in a dilapidated state, poor families began to move in. At its highest density, it was occupied by 900 families—some 4500 people. With legal protection from the housing cooperative Casiques de Venezuela, they built their dwellings and remained there until 2014, when they were evicted by President Nicolás Maduro. After negotiating with the person in charge of the community, a kind of kingpin who governed the collective life and imposed the rules, Bonadies and Olavarría entered the tower and documented the domestic spaces and the new architectural morphology, in addition to holding conversations with the inhabitants. According to the artists, the tower is an icon of the last few decades of Venezuela: from the modernizing promise of capital to the revolutionary promise of the state.

Conceived as a graphic novel, In the Belly of the Beast is added to the numerous works carried out under the heading David’s Tower, which adopted a variety of formats, including installations, sculptures and photographs, according to how they were displayed to the public. This exhibition includes not only the original drawings, but also a new museographic presentation that was conceived specifically for the Sala Miserachs.