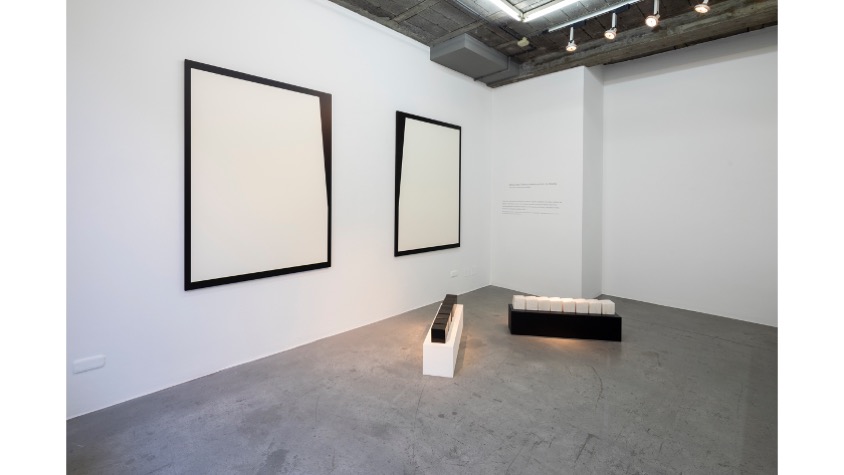 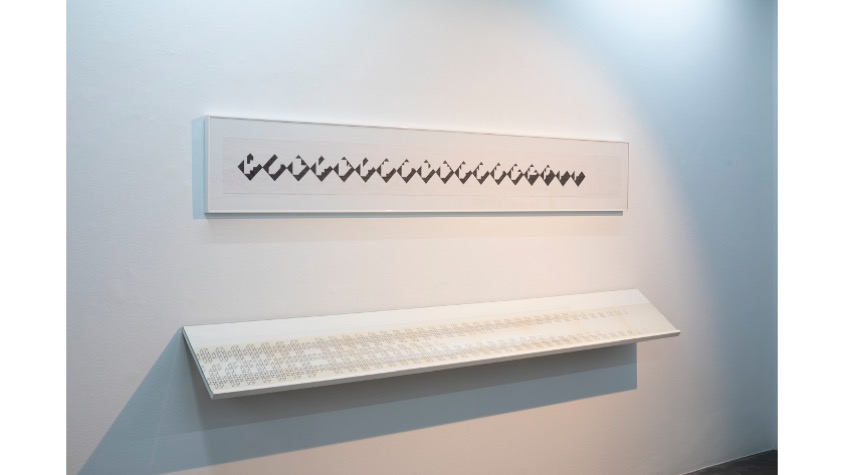 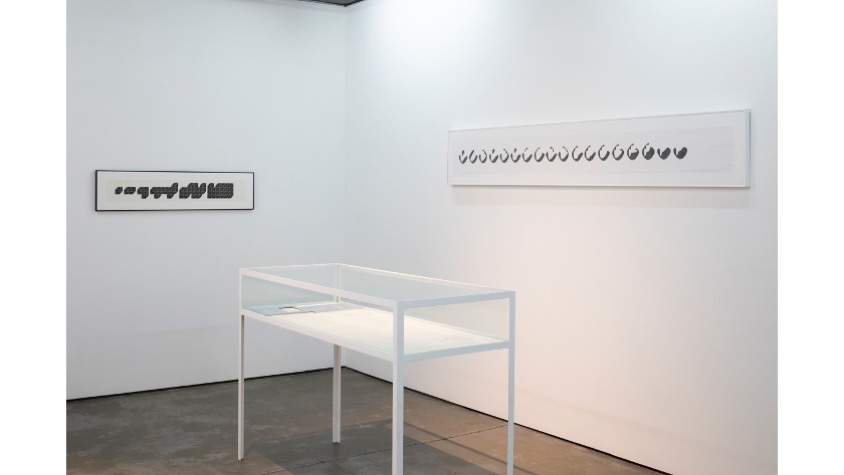 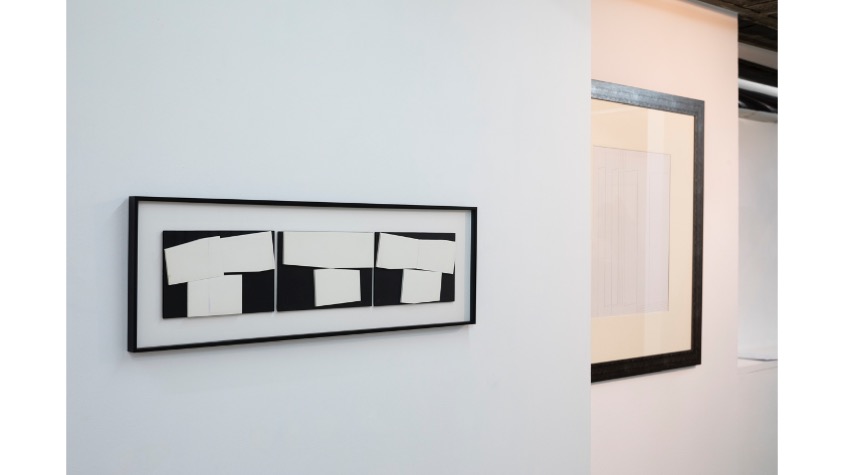 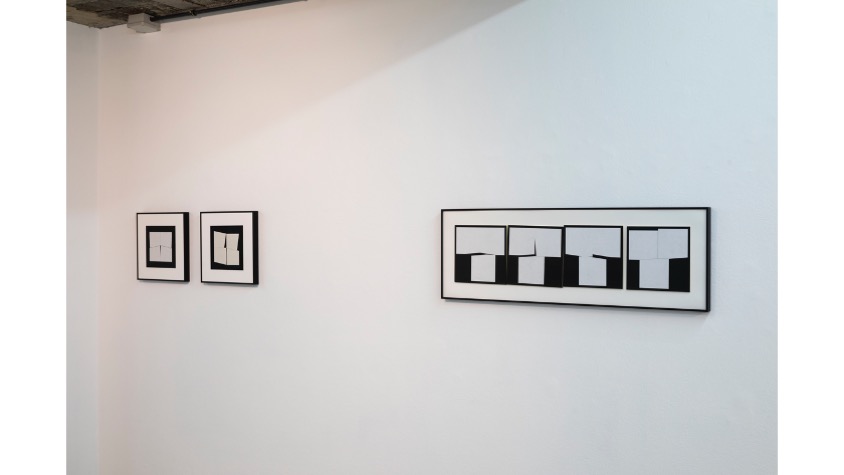 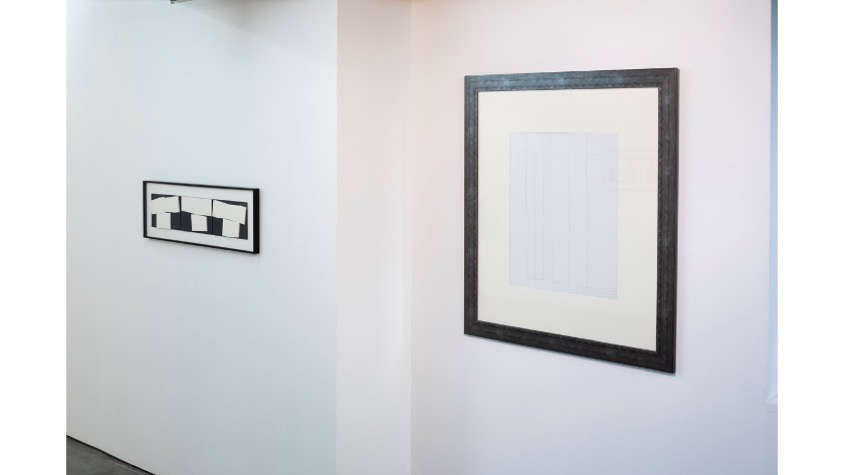 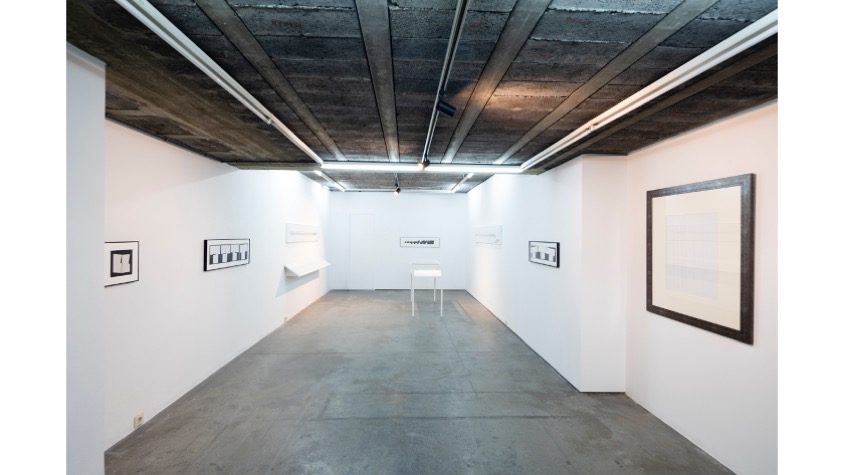 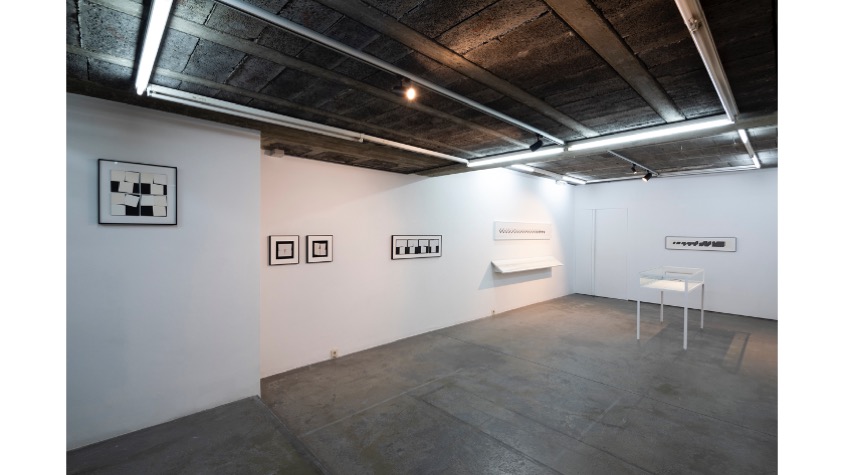 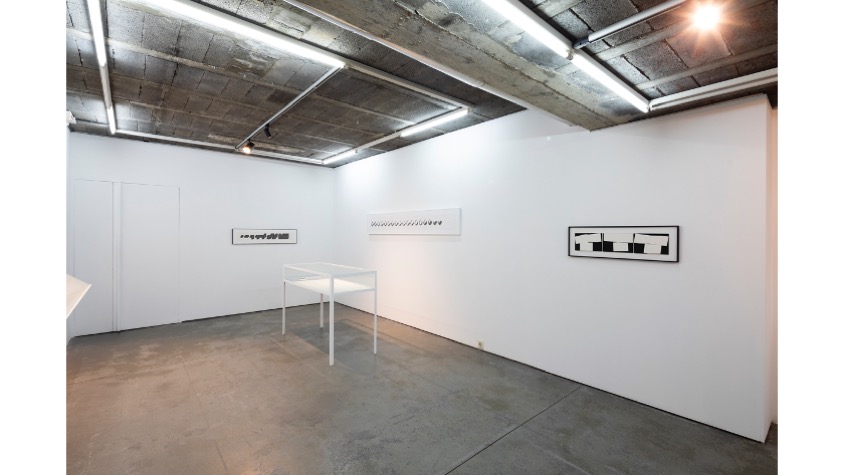 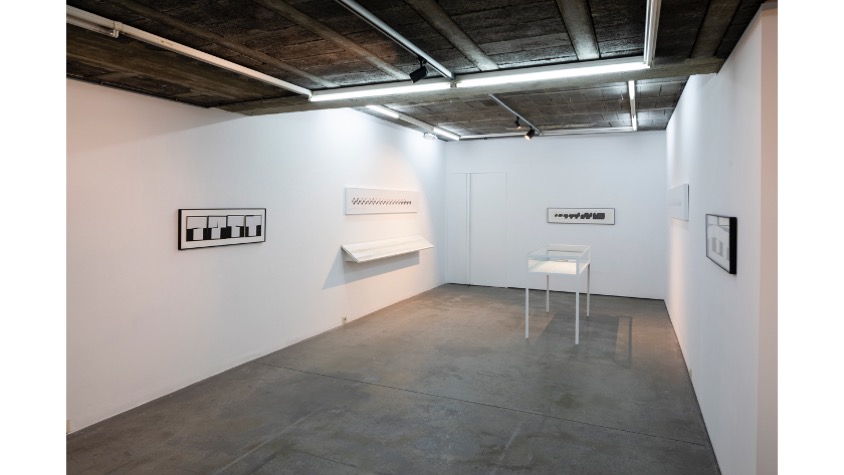 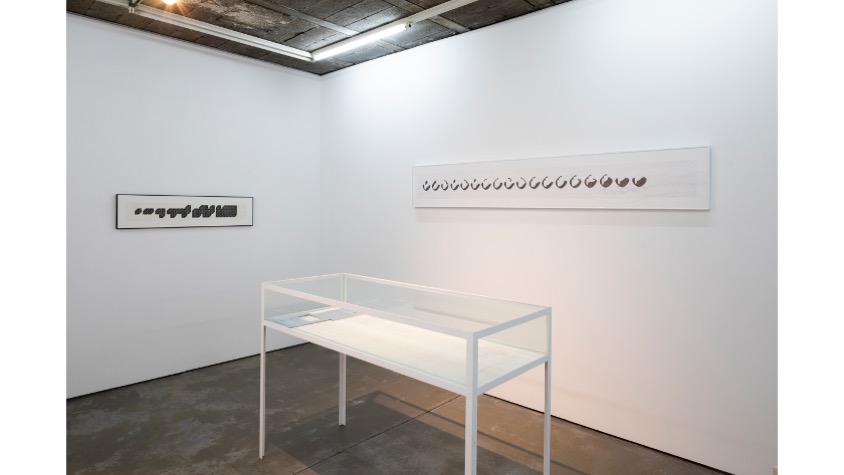 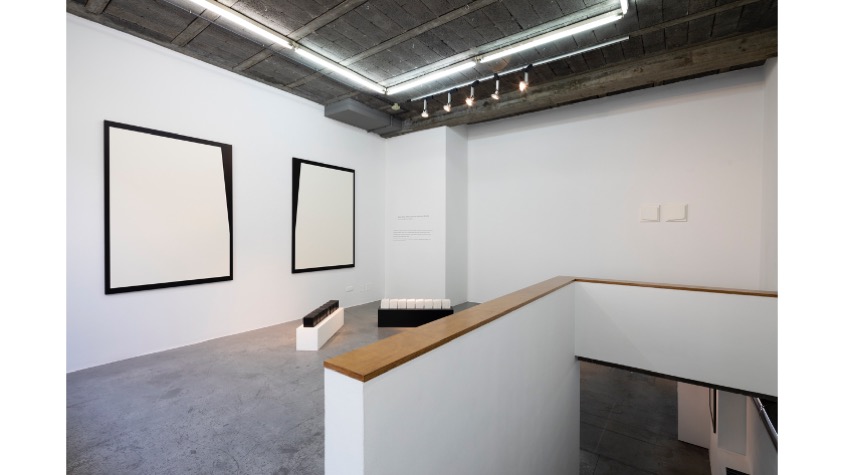 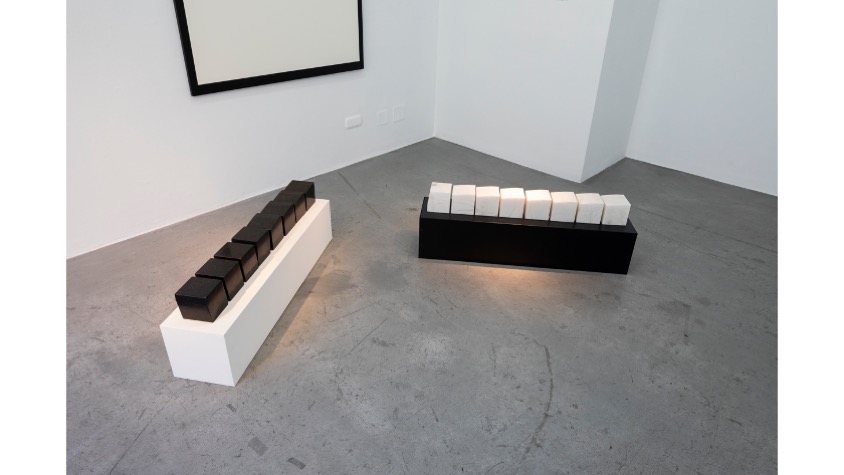 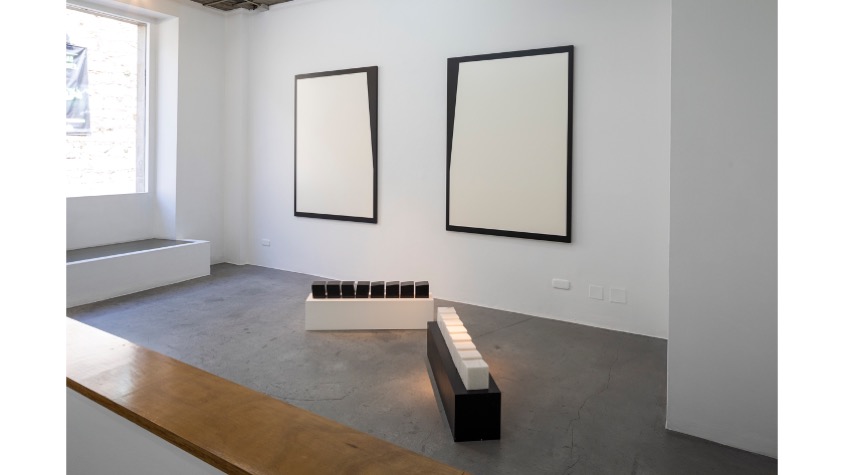 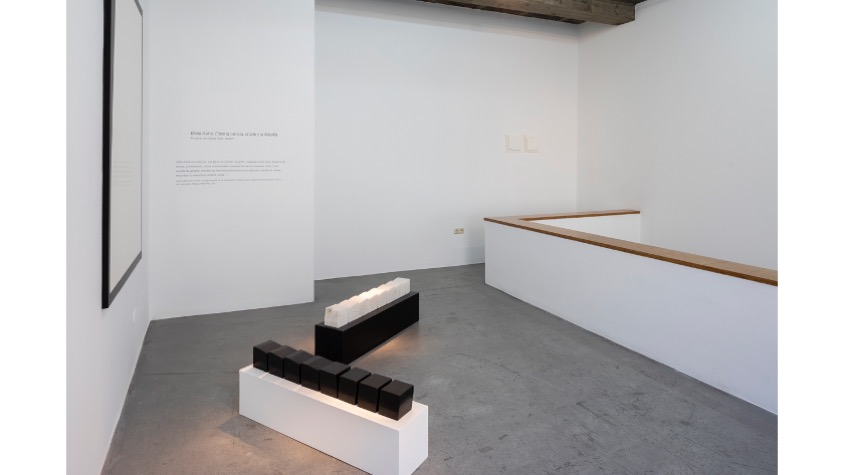 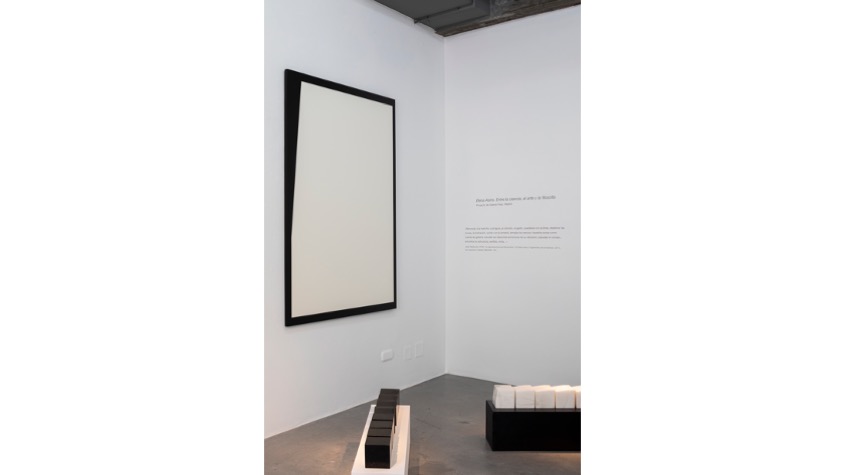 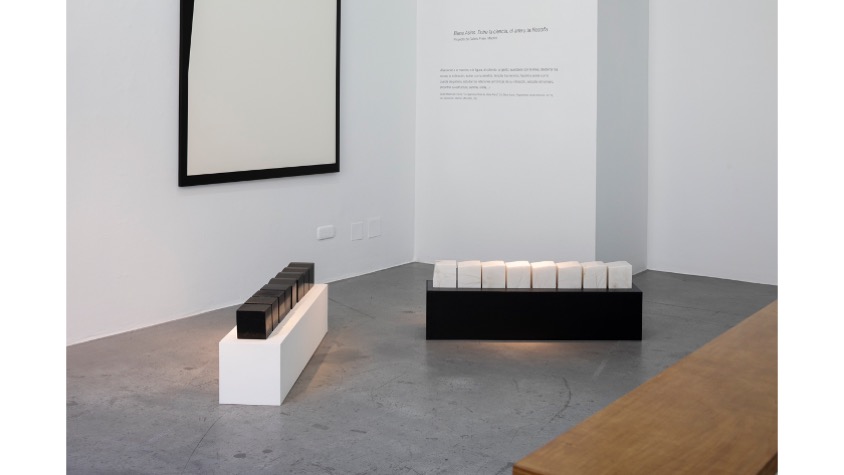 To abandon stains, figures, colors, gestures, to remain with lines, to banish curves, inclination, to fight with symmetry, to temper the nerves, to make them sound like guitar strings, to study the harmonic relations of their vibration, to study numbers, to find their structure, to feel it, to live it...

Elena Asins (Spain, 1940-2015) was a multifaceted artist whose work lies at the intersection between logic, linguistics, mathematics, philosophy, music, technology, architecture and visual arts. Asins, pioneer in conceptual and cybernetic art, had an experimental and multidisciplinary background. She studied at the Fine Arts School in Paris, at the University of Stuttgart, where she studied semiotics with Professor Max Bense, at the Calculus Center of the Complutense University of Madrid and at the New School for Social Research and Columbia University (Department of Computer Science: Computer Art) in New York.

All aspects of her life, from the most intimate and everyday ones to the most public ones, through her work, could be encompassed under the term Gesamtkunstwerk, the total work of art. This would include not only her models for a city project, her public sculptures, her abstract scores based on Mozart's Prussian quartets, her sculptures in alabaster and black stone from Zimbabwe, her megalithic figures, her digital drawings, etc., but also her personal letters and notes, the isolation of her house in Navarra, her solitary life, the clothes she wore, and the way she watched television, all in black and white, all part of her thought, expression and language. Asins does not draw a distinction between art and life, between art and non-art, but rather understands "ART within life (life as art and art as life)."[1] In this way, structure, order and logic permeate her life and her artistic career, giving rise to that Gesamtkunstwerk, which has a clearly processual and experimental character, both adjectives inseparable from her work. According to the artist herself, "what is important is the act of thinking about the realization of a work, the research, the finding," that is, the process, the search, the concept and the thoughts behind it.[2]

Through expressive techniques such as variation, repetition and geometry, always with a logical and mathematical basis, Asins developed her language, materialized in works of great serenity, elegance and rigor. In the artist's own words, "I am not guided by criteria of beauty, but by criteria of logic and mathematical ethics. We are dealing with an algorithm, so if I remove a figure or modify it, I am lying."[3] It is, therefore, an algorithmic aesthetic, also linked to the world of programming, computer science and binary language, of zeros and ones, of positives and negatives, of blacks and whites. Her work is constructed through combinations, repetitions, variants and mathematical variables, which constitute the possible states of reality, of things and of existence. A fervent follower of Ludwig Wittgenstein's philosophy, Asins reflects his thought through her work, in her attempt to digitally draw a four-dimensional cube, or in her creation of "objects [that] contain the possibility of all states of things."[4] [5]

According to Wittgenstein, "thought contains the possibility of the state of the thought things. What is thinkable is also possible."[6] It would seem that Asins' work is a constant reminder of this statement by the Austrian philosopher. Each thought of the artist is translated into an object, which contains one of the possibilities of being, of existence, which she accompanies with multiple other variants, other objects, each of them with subtle alterations barely perceptible to the human eye. Of these variants, none is complete in itself, individually, inert and isolated, instead they interrelate with the other objects, with the environment and with the spectator him/herself, without whom communication, the transmission of meaning and the sense of art would not take place. It is a conception of art that is not static, but rather also incorporates and depends on those ideas that it generates in the viewer, turning the encounter between spectator and work into a call to thought and introspection.

It is therefore clear that Asins' work is based on thought and language, be it philosophical, algorithmic, mathematical or artistic. The computer acted as a mediator between thought and work in most cases, almost from the beginning of her artistic career. The first encounter between the artist and her technological accomplice took place at the Calculus Center of the Complutense University of Madrid, when in the mid-1960s a computer, the IBM machine, arrived for the first time at the Spanish university. Since then, her interest in programming, in the relationship and communication between human and machine grew. As Miguel Ángel Valero Espada states, "creating with a computer is the art of understanding the nature of the digital, understanding the principles that govern the thought processes of machines". [7] This is precisely the constant in Asins' work: that permanent search for an understanding and communication through different languages and disciplines, giving rise to synesthetic works, difficult to classify, located within a parenthesis, an intersection, a silence and a pause, situated between the two-dimensional and the three-dimensional, the artificial and the natural, the tangible and the intangible, presence and absence, emptiness and wholeness. By detaching herself from ornament, from color, and even, at times, from the human imprint, Asins embraces the elegance of the digital line, the serenity of the logical structure and the subtlety of pure geometric forms, without this entailing an abandonment of the mystery or the magic that leads the human being to a sense of wonder or awe towards Asins' total work of art (Gesamtkunstwerk).