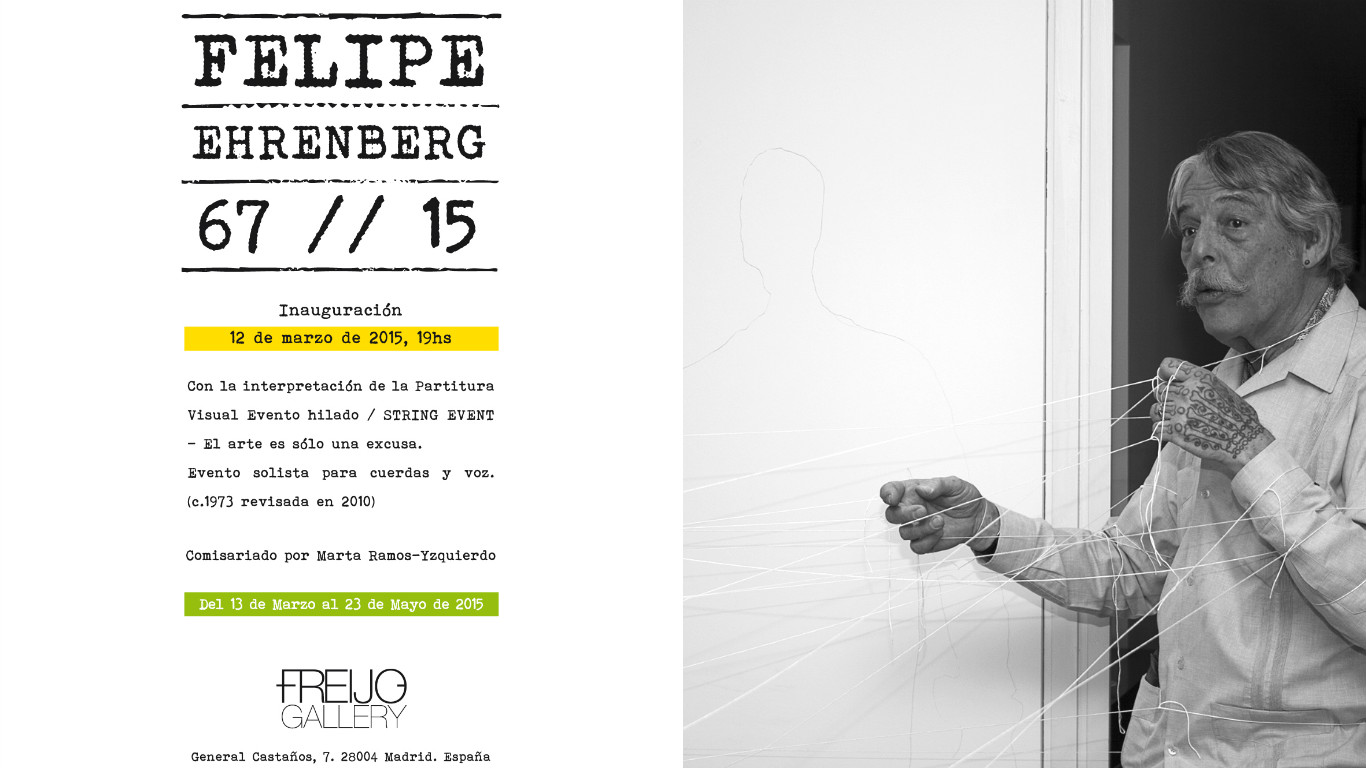 Invitation to the opening of his solo exhibition "Felipe Ehrenberg 67 // 15", where he carried out his performance "String Event". 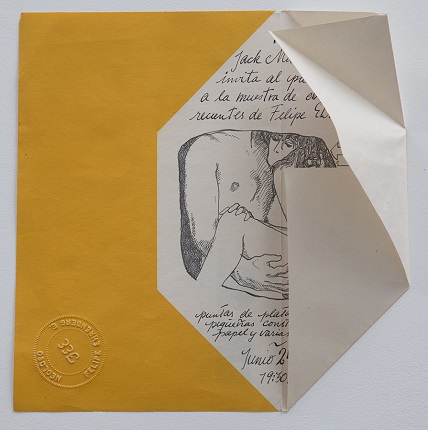 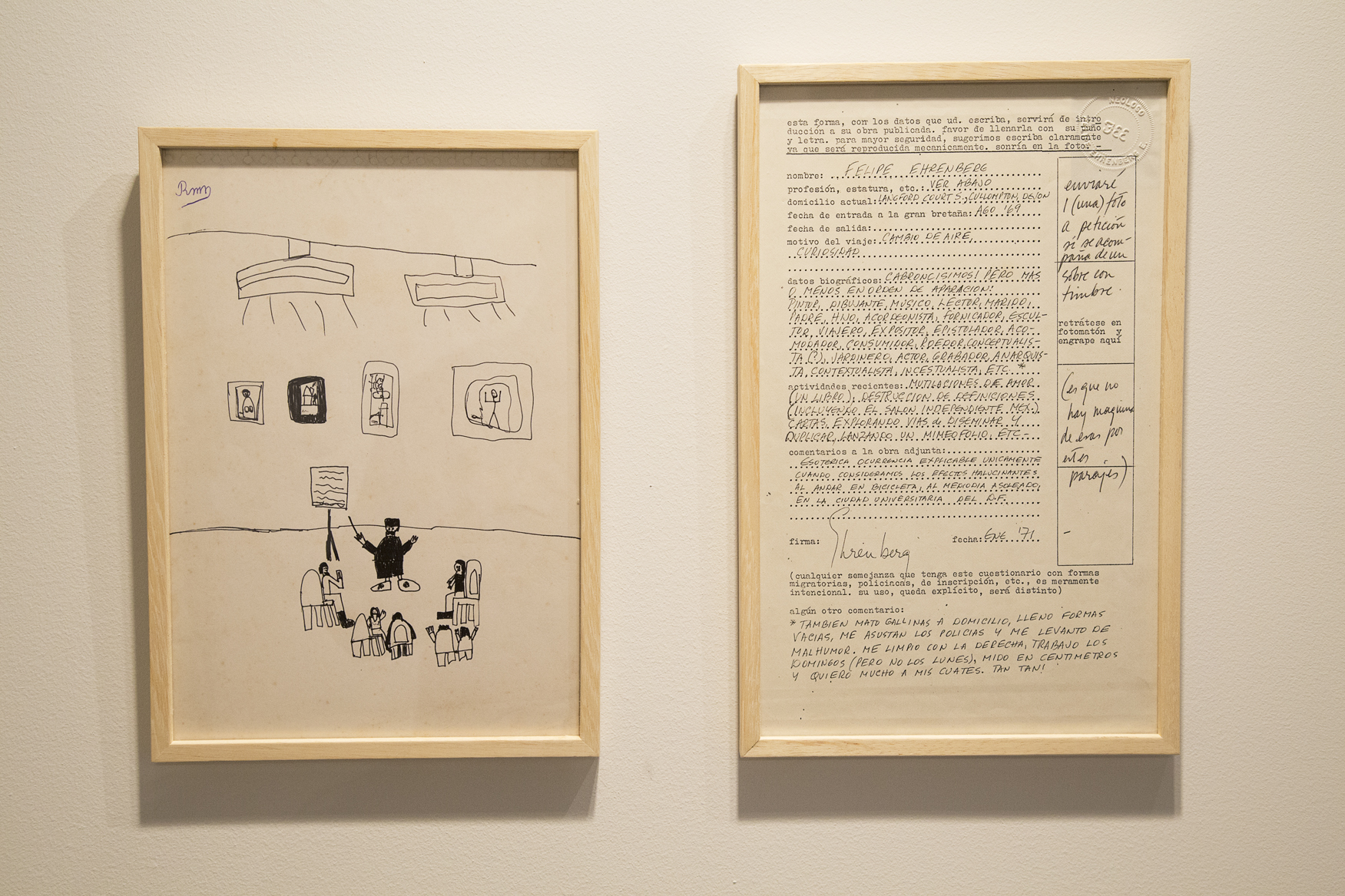 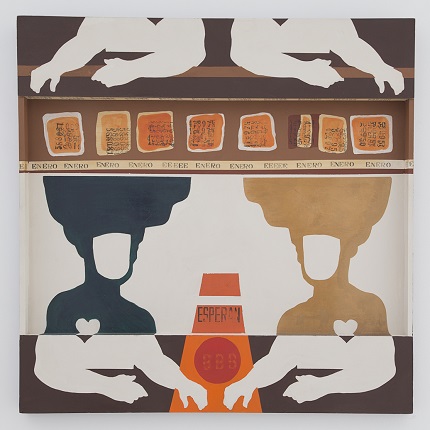 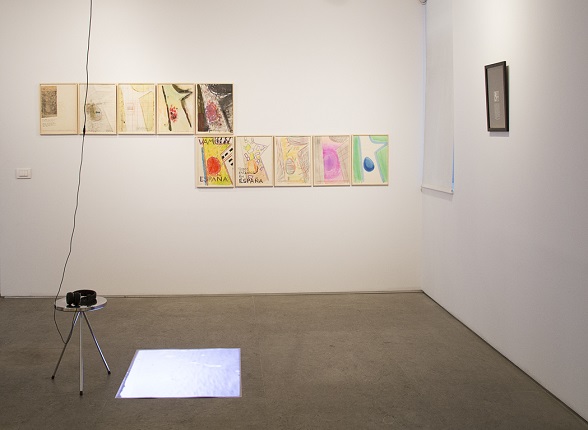 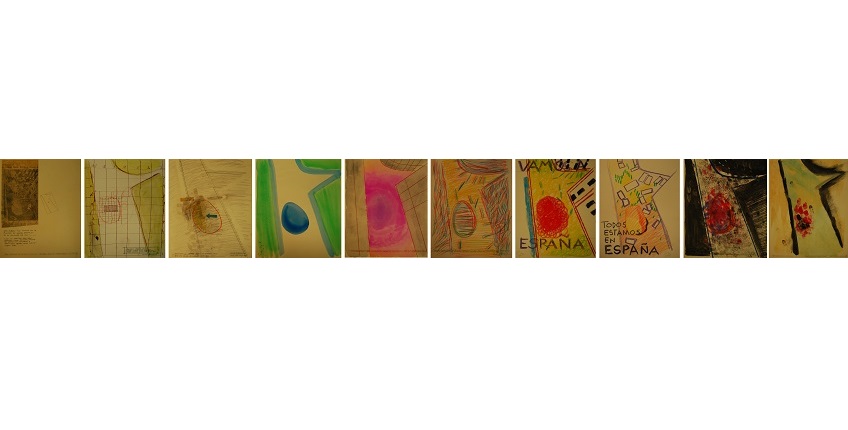 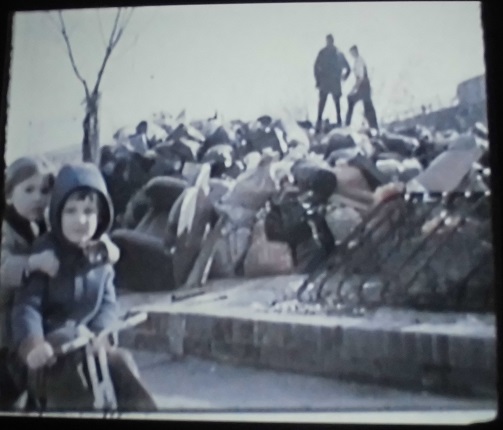 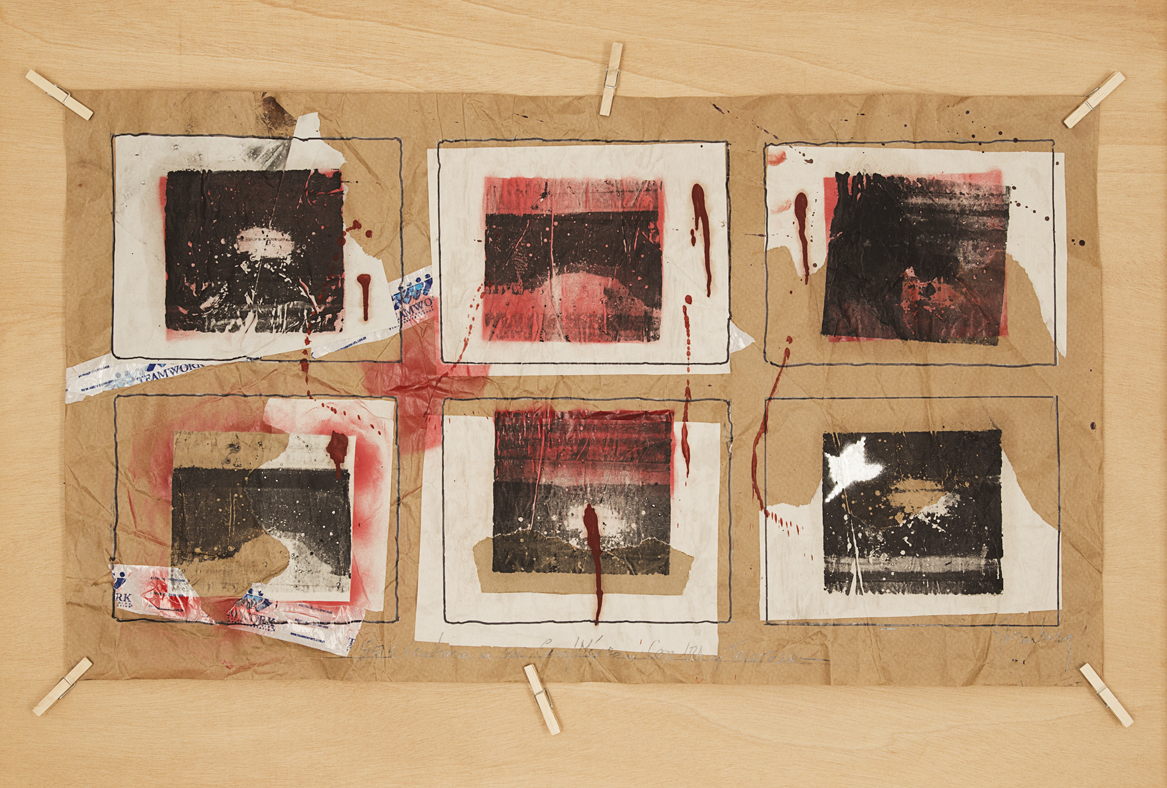 "Six Windows to My Home/Mexico - with Anger and Sadness," 2014. Mimeographical ink applied by roller or dissolved in thinner, drops of blood (from the author), acrylic spray, Sharpie ink, pencil, plastic tape on Revolution and Kraft papers made in Brazil. 56 x 98 cm. 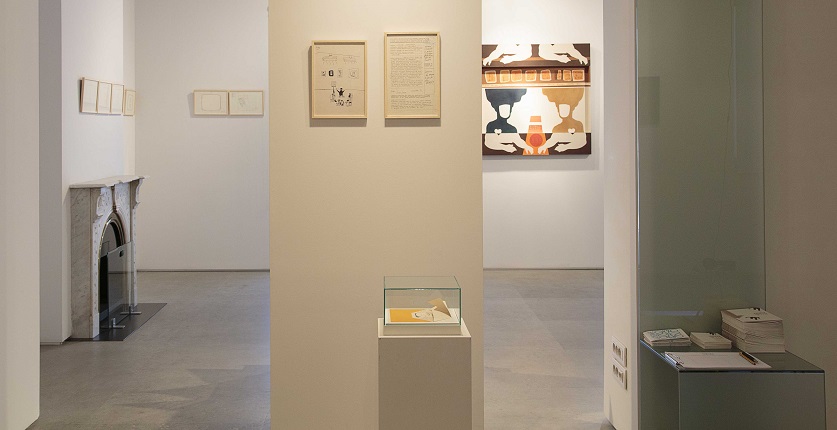 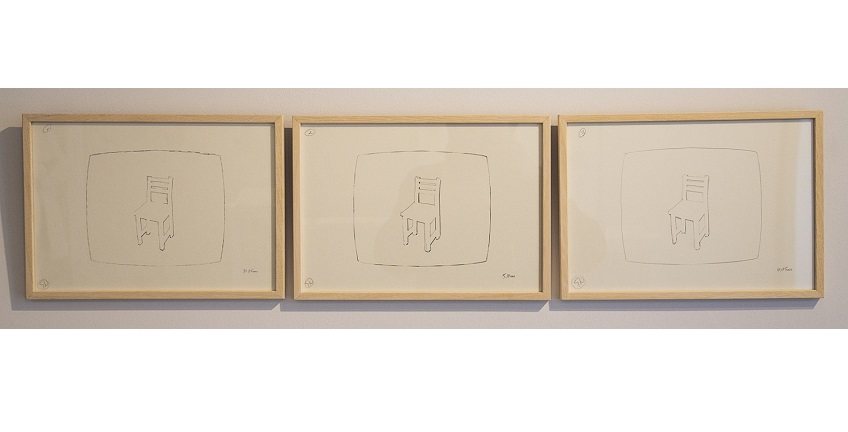 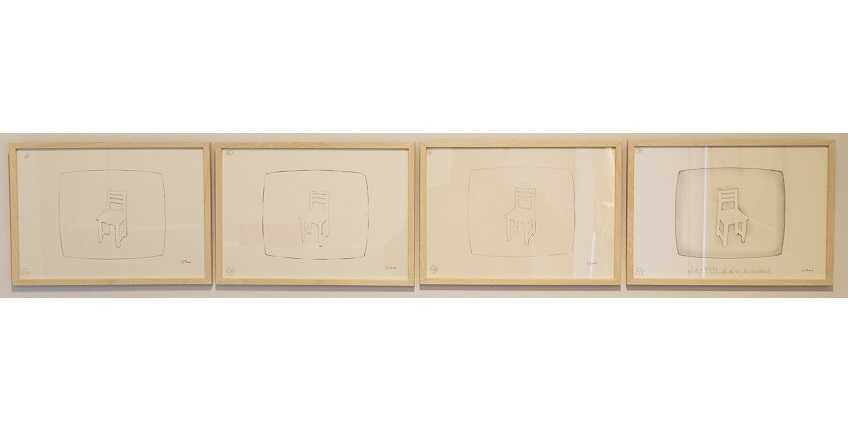 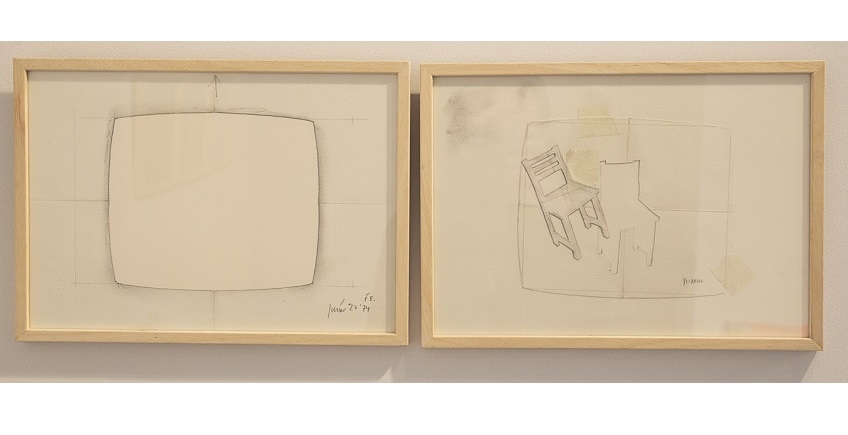 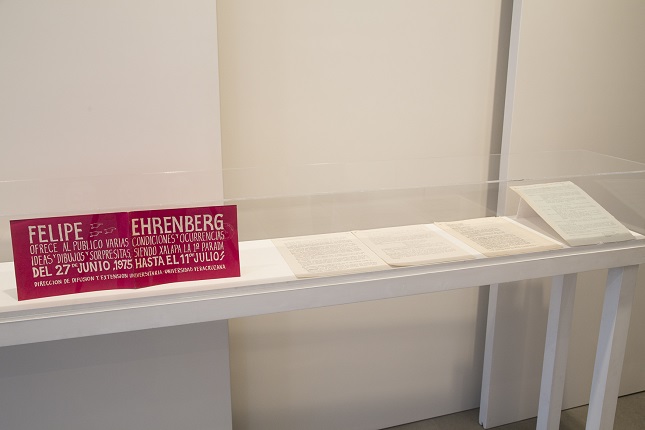 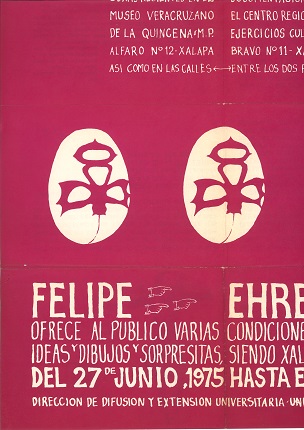 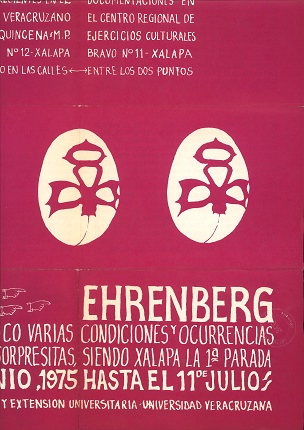 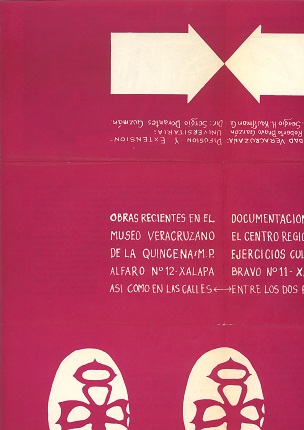 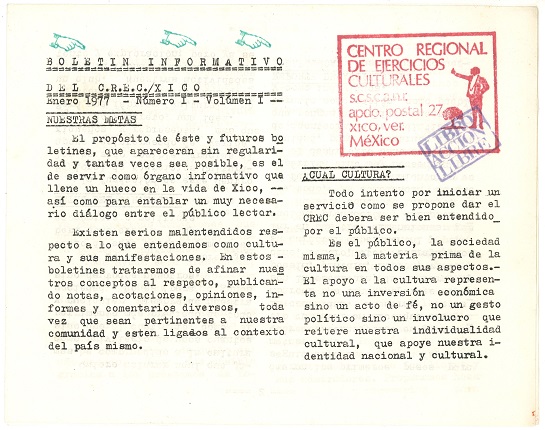 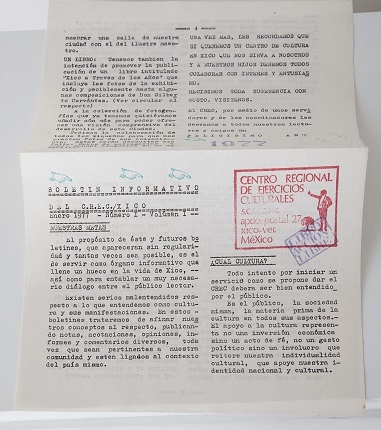 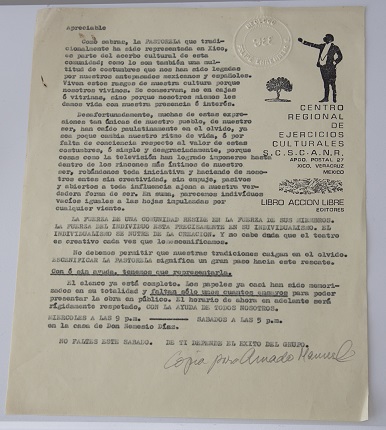 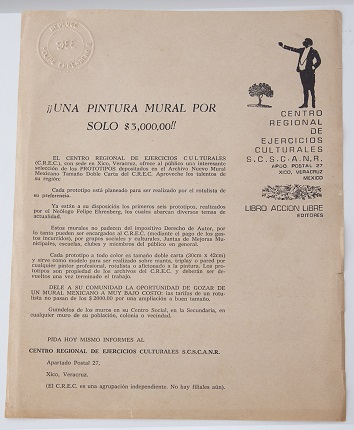 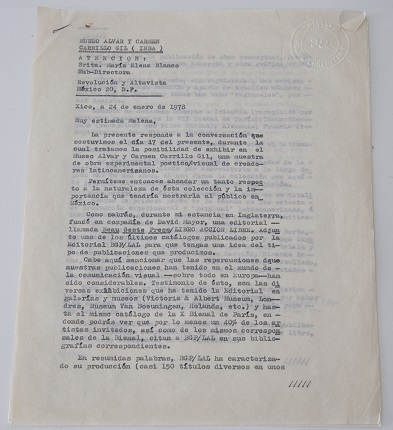 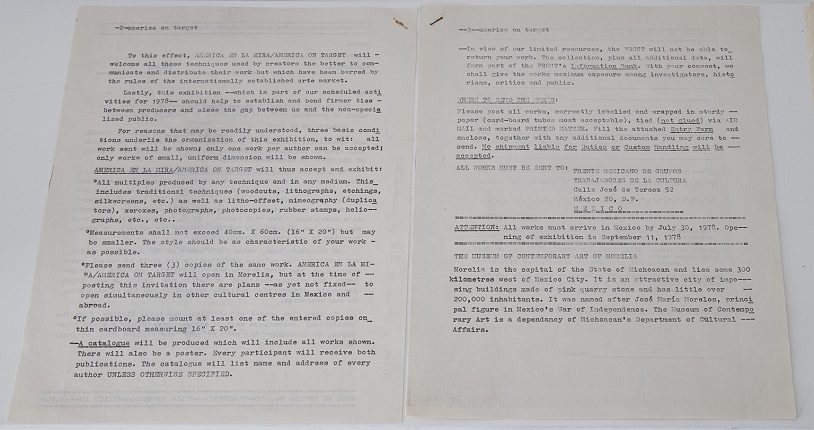 "America on target." Dates near and prior to July 1978. Typewritten copy on paper with calligraphic note. 3 pages stapled 28 x 21.5 cm. 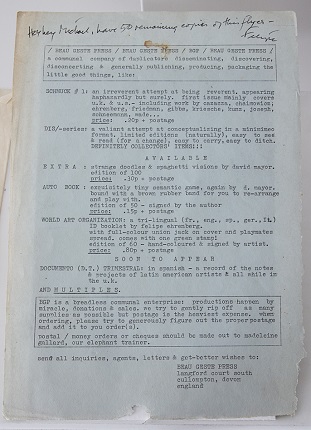 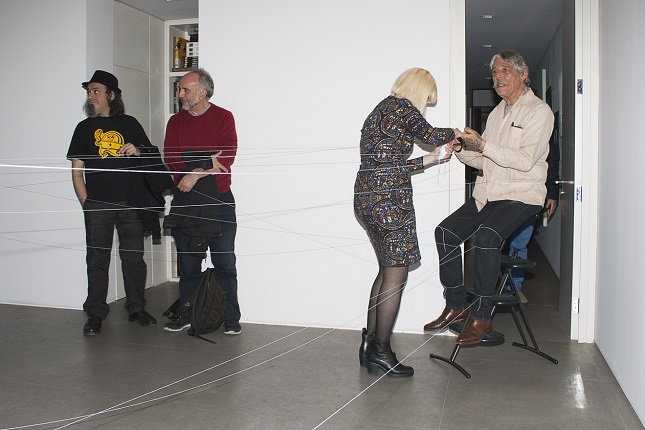 "String Event - Art is just an excuse." Solo event for strings and voice. Performance carried out the day of the opening by the author, leaving as witness the threads with which it was made. 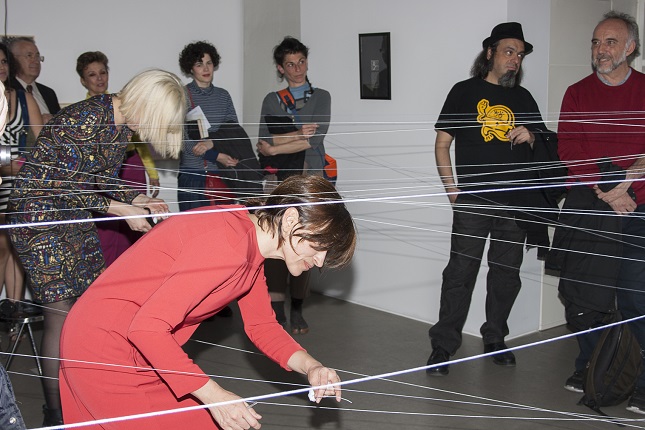 "String Event - Art is just an excuse." Solo event for strings and voice. Performance carried out the day of the opening by the author. 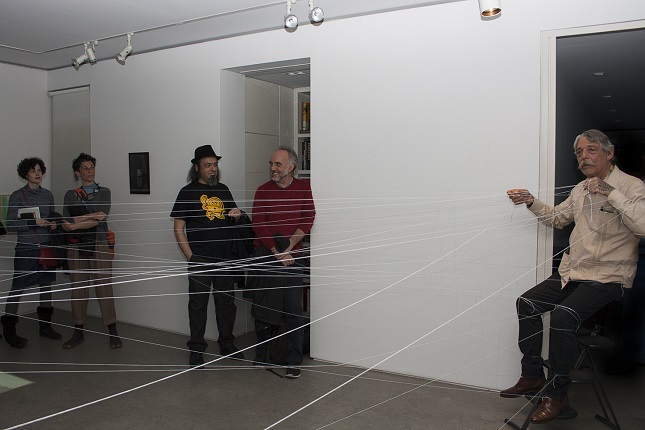 "String Event - Art is just an excuse." Solo event for strings and voice. Performance carried out the day of the opening by the author 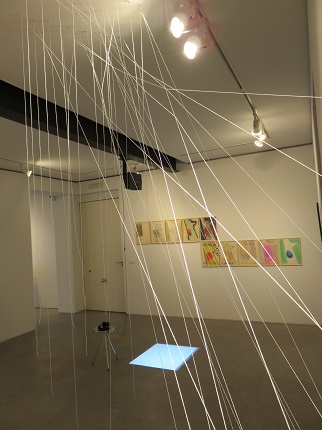 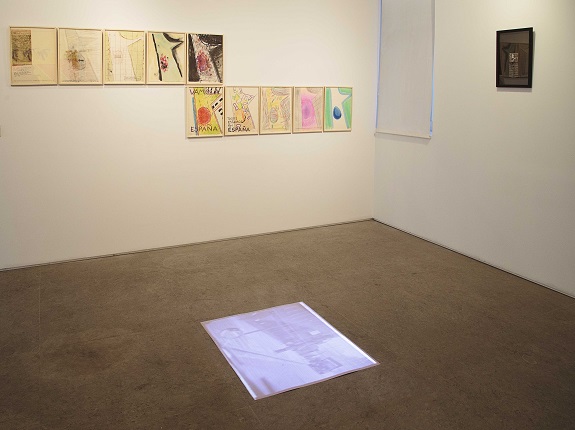 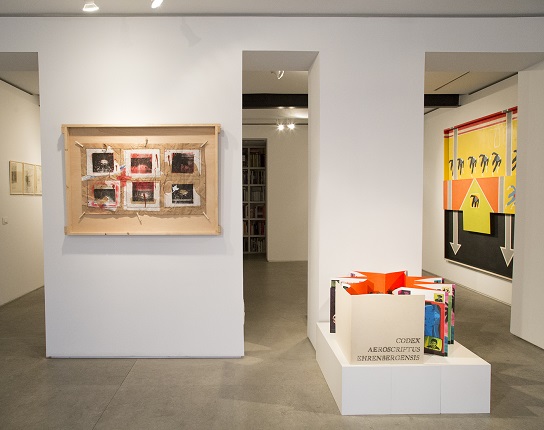 Ehrenberg's precise place in Mexico's culture is still to be defined. Could he be the artist who has allowed a look at those spaces in our contemporary life which we, in our thirdworldly purism, have been unable to visualize? Is he the Rupture Generation's misunderstood radical or is he the cultural guerrilla fighter who best represents Mexico's iconoclasm of the seventies? Is he the link between the highs and the lows of our cultures or is he a precursor of todays's intercultural blend of postmodern identities? Is he Mexico's Grand Conceptualist? Is he a sponsor, a representative, of Chicano-hood, an incarnation of redeemed Pachucos? Is he a generational freak, a clandestine critic of art or merely a passing fad?
A slew of opinions have been voiced, albeit too few in print. And none have addressed the core of the matter, namely Ehrenberg's oeuvre. A deep silence surrounds the work he's created; there is an imbalance between the criticism aimed at the person and the critique which his work demands. No one can deny his notoriety: a key figure in the Group phenomenum of the seventies, a constant lecturer and facilitator, ever present in political and community affairs.

Another matter is the work he's placed before the eyes of the public, out in the street, in galeries or museums.
We face an artist who, especially for the younger generation to which I belong, is an undescipherable mystery. His work is to be found in no public collection. No memory of his actions and objects, most of which have disappeared, is to be found in books or catalogs. Nor does it help that much of Ehrenberg's more recent projects have been undertaken in the US, where he has a faithful following. Bluntly speaking, Ehrenberg is recognized as name rather than as a cluster of images. A name, moreover, which lies hidden deep behind a dense forest of contradictory adjectives.
Let us suppose for a moment that we now confront, not the name, but the works that constitute "Past Imperfect". What have we then? To begin with, we have an exhibition of three very distinct types of objects: in the first place, we have installations, mostly ex profeso prefabs. In the second place, we have something akin to constructs, giant books, giant wooden boxes, from which spring a multitude of painted and cut-out figurative fragments. And lastly, walls hung with paintings, some of which are accompanied -an academic artifice- by references to their origins: news photos easily related to the painted images. Certainly a loaded atmosphere, almost murky, heavy with bright colors. An ambiance, the residue of a determined taste.
The dominant note in all these works is their inclination to be referential. Nothing in them is totally foreign to us; we stand before a legible universe. In other words, to each item stored in sectors of our localist memory there corresponds a secure particle in the information bank of our context: it is thematic matter common to us all, therefore of "low" intensity. In principle, none of our history lessons at school were necessary. Nor is it necessary to read specific periodicals and magazines. Suffice it to have been contaminated by, to have been exposed to, Mexican primary school textbooks, to Mexican TV, to Mexican journalism, to Mexican markets and suburbs.

We stand before someone, then, who knits away, nonchalantly, with the yarn of the commonplace. Someone who erects a set of scenarios which, we are told, speak of the events that happened within a determined space (Hispanic, Mexican America) during a determined timespan, 500 years from the time of the arrival of European society on our coasts. Are we interested in the evangelization of the continent? Under wooden crosses hide the painted walls of the ravished temple of Cacaxtla. Is it independence and liberty we want to address? There we see the broken chains and the articulated wooden wing imagined by Da Vinci. Would you have us speak of Columbus and of ravished native women? There you have a ship's bow and the stone corn-grinders.
First conclusion: the artist is someone who takes it for granted that by forms we understand, foremost, thematic constants. He is aware that in our mind's eye we are wont to confuse style and content, that we are unable -actually loath- to face a cultural artifact which seeks not to emulate those values we hold to be proper to the times; that, in other words, the way we translate events is already loaded by specific arquetypal configurations.
Images are a given fact: death is always the skeletal creature or the dance macabre, prehispanic gods all look like those in Borgian codices. We are faced with evidence that the gist of all our historical representation is, foremost, a road well trodden by marionets that move only when we remember. In other words, the narration was established long before. We can be horrified or amused by a script which, insofar as its visual topics are fixed, is no simple matter to unravel.
The coherence of the exhibition lies in the tone of its setting. Most of the objects on view look and feel like toys, or like scenes in a folk fair, like sets in a poorman's House of Horrors. All is therefore jocular. The show is a version of Mexico's very own and magical Disney world, with a succession of Nahuatl-lands, slavelands, Spanishlands, albeit in muted tones, as befits us Mexicans. Is there anything epic? What with? And then again, who for? Is there drama? With solemnities is paved the road to boredom.
We might now speak of identity and of identities. The exhibition churns right into and against the many debates we are wont to hold as to the real identity of those who people the history of Hispanic America. What was needed was a bit of the farcical, of the absurd, of parody, to uncover the literary wraps that cloak all those yarns spun around Guadalupe-Tonantzin-Coatlicue-Malintzin-Llorona, which drag themselves through the infra world of Mexico's psicohistory, to show that they are are less oppressive than claimed by the muralists and novelists and essayists of Mexicanhood. Yes, we are made of the paste of the past. Sure, we are a nation weighed down by hundreds of generations. But things are not that dramatic.
The artist, Felipe Ehrenberg in this case, becomes the voice of an operetta. His pieces are cunning because they seem ephemeral. We see much work and artistic love, but we also see his deliberate intention to place himself beyond the aspirations of the major genres. He has a passion to create inmediate evocations. The works are an excursion into the daily inventiveness of the toy builder and the paper mask maker. I don't know if Ehrenberg could further refine his pencil strokes or weather he hides a faulty technique behind the gesture. In fact, does it matter? Is not technique a question of adjusting to a purpose? Is not full utilization of the materials' inherent qualities enough?
The collection is imperative, it overflows. I won't say I like all his pieces. At times I feel he could reach higher and escalate that element of brutality present in the rhetorics of the reception given Columbus (in shirt and tie) by camerapersons and reporters and a bare bottomed Queen Isabel. I confess to being a fetishist, I like being astounded by works that knock our socks off, works we can never forget.
Ehrenberg's generation wanted to dissolve cultural poles. He is part of a crusade against the prerogatives of mainstream culture and in favour of the expressions of the disposessed. Since his return to Mexico nearly 20 years ago, his work has run hand in hand with the esthetics of what he calls "el Mexico moreno" (brown skinned Mexico), and of what he proudly proclaims to be "bad taste". What he has managed to do is to submerge himself completely in a visual territory that has been explored by others, but only partially. His has been, in a sense, a conversion. In other latitudes, this confusion of meanings between high and low culture have been called postmodernity. It seems curious that in Mexico these two positions are in conflict.
Marcel Duchamp used to say that taste is nothing more than the repetition of something a number of times. Ehrenberg's work, in fact, seeks to reiterate the esthetics of the barrio. At the same time, it is also a refined and even cultivated version of specific esthetic habits. Facing his works, viewers can confirm their tastes and history, good or bad. So far so good. The surprise comes when a given work escapes reiteration, jumps its vectors. Ehrenberg's success lies precisely in these unclassifiable moments. He leads us through that colonized space we call visual language and suddenly confronts us with evidence of things we didn't want to know, in order to prove that all signifiers are fixed, therefore vulnerable.
(Transl.: M.B with F.E.)