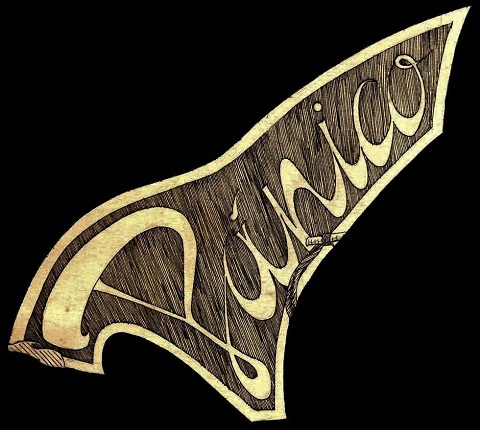 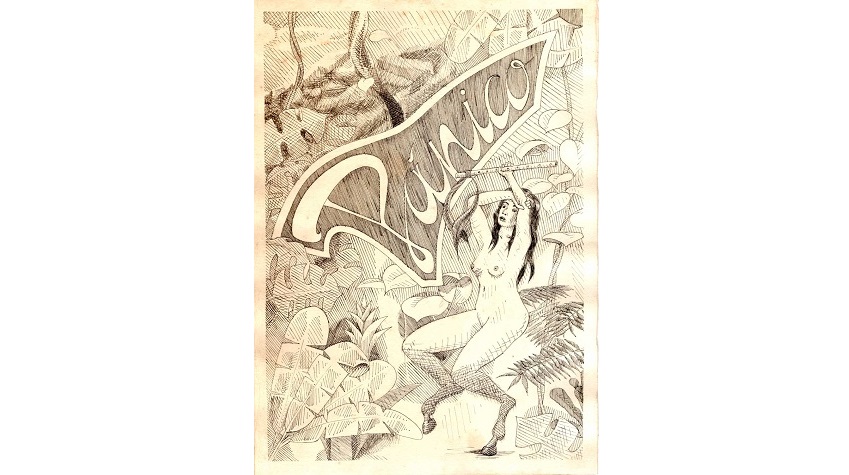 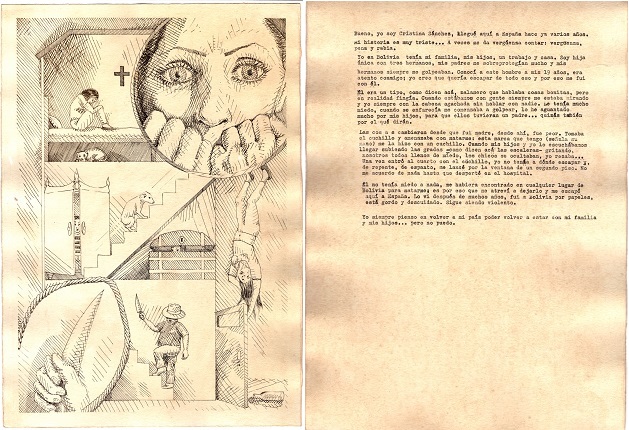 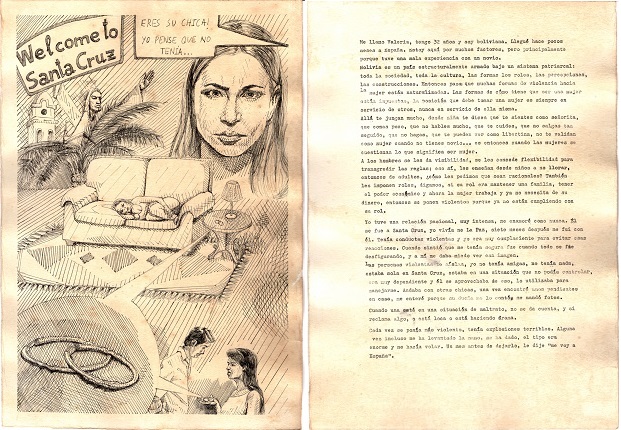 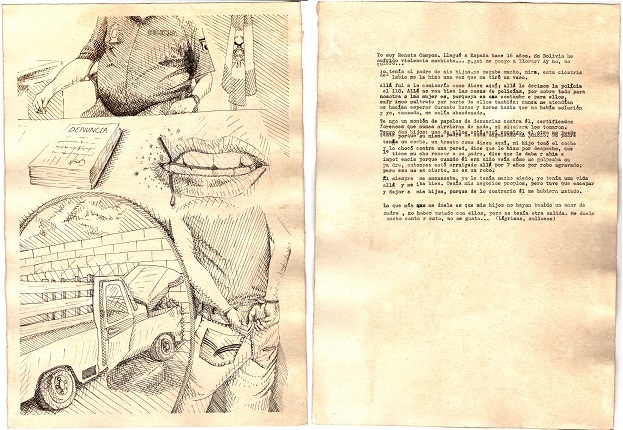 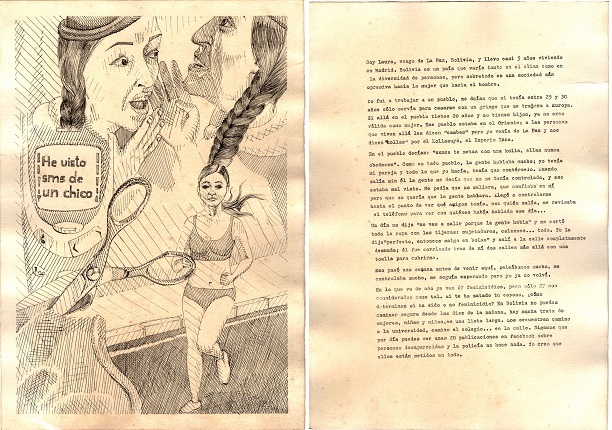 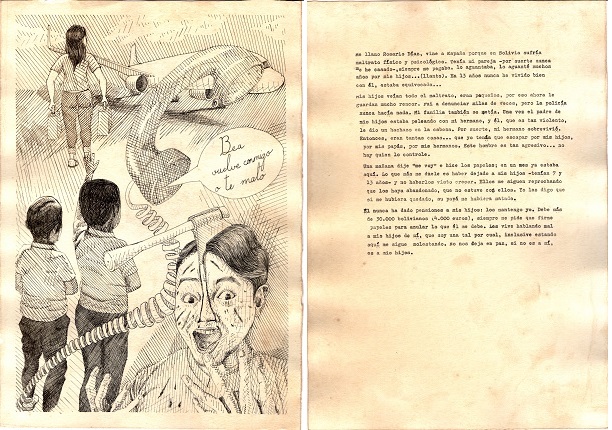 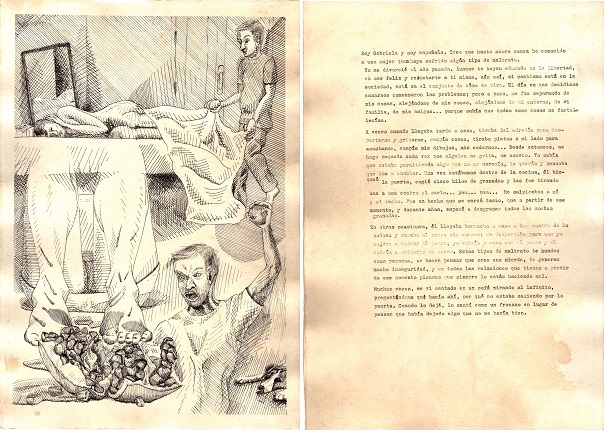 Simultaneity, equivalent to plurality-ubiquity, is one of the three basic elements of manifestation of the God Pan (along with terror and humor), which etymologically belongs to the definition of panic.

Thus, we understand by panic a very intense and manifest fear, especially the one that suddenly overwhelms a collective in a situation of danger. And these are precisely the two issues that truly define this project: simultaneity and the feeling of danger within a collective.

Panic is a new project by the Bolivian artist Glenda Zapata, produced by Freijo Gallery in Madrid for the presentation of her first exhibition project within the LZ46 program, for which the artist has held numerous discreet meetings with different women, also of Bolivian origin and residents of the Usera neighborhood in Madrid. The conversations that took place in these meetings have been graphically transcribed by another woman.

This practice mirrors the illustrated chronicle magazines that toured the kiosks and streets of the cities in the first half of the 20th century, which are now presented in a double format through an exhibition and a publication, which has the character of number 0.

Although the protagonists of the exhibition are women, with their stories, their fears and their lives, the objective of this project goes beyond gender in that it aims to reach the breadth of society, since the violence suffered, recounted and drawn by women of Bolivian origin is shared by many Spanish women who see themselves reflected in them and there are many men who participate in it; in addition, as Rita Segato explains in the mandate of masculinity, the first victim is the man because of the implicit social burden. However, it is society as a whole, all societies, that is ultimately responsible for the continuation of this violence and for its acceptance.

The double victimization of the women protagonists of these stories - by suffering violence in their bodies and by being publicly signaled when denouncing it - is one of the reasons for their migration. When they arrive here, however, they find a scene that is not so different from the one they were fleeing.

Another interesting issue that runs through Panic is the role of the translation of oral stories into a graphic support drawn by a woman, in this case of Spanish origin, who has played an important role in incorporating into her role as a chronicler, the exotic imagery implicit in her education and culture by bringing forward the idea of translation as an added value to the story.

The exhibition consists of a series of drawings, the publication of Panic No. 0, and is completed with a series of sound works in which the sounds of popular music are accompanied by lyrics composed by Glenda Zapata based on news items published in the Bolivian press referring to other cases of gender violence in which the impunity of corruption and social shame also come into play.

Glenda Zapata studied at the National Academy of Fine Arts, specializing in painting and alternative media. She then attended workshops on photography, performance, cataloguing of cultural assets, among others, and is currently studying Forensic Anthropology at the Professional Institute of Forensic Sciences in Spain and POPS, a programme oriented towards subaltern practices in Matadero, Madrid.
She has exhibited individually and collectively both in her home country and abroad. Worth highlighting are her participation in the first world meeting of young artists representing her country, WEYA in Nottingham-England, her first solo exhibition "Anamnesis" in the Casa Rosada, Santiago de Chile, "Semblanza" in OKK, Berlin, Germany, as well as multiple exhibitions in Ecuador, Colombia, Italy, Spain, Argentina.