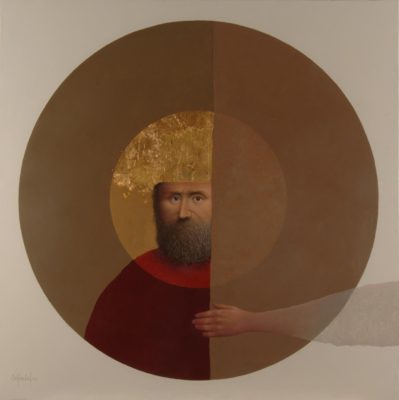 In 1956 he joined the UNAM for study the architectural career. Before finishing his studies he made a trip to Europe, visited France, Spain and Portugal, countries where he will focus his interests around painting. In 1964 he obtained the title of architect, but his true passion was painting and poetry.
In 1969 he exhibited for the first time individually at the Mexican Art Gallery; From this moment he made the decision to dedicate  himself exclusively to painting, and in 1971, he presented his first individual exhibition, at the Lambert Gallery in Los Angeles.
That same year he participated in a collective exhibition entitled The Spirit of Surrealism at Baukunst Koln in Cologne where he  participed with artists such as Leonora Carrington and Alberto Gironella.
As a result of that exhibition, his work has often been classified within the surrealist movement; because surrealism is an attitude towards life and art rather than an aesthetic school; nevertheless, its production is impregnated with a strong character that remains outside of classifications, oblivious to the currents and styles.
His artistic production surprises us with original innovations: it encloses, in capelos or showcases, drawings and paintings made in paper that previously he wrinkles. In 1976, Del común de los santos appeared, an exhibition in the Mexican Art Gallery where this type of work first appeared.
In 1978 he made his first foray into the world of self-portrait, mainly through the works The Strange Secret and Who Will Deliver Me? In 1980 he lived for a year in the city of Wilmington, Delaware, in the United States, and the following year  in the city of Cuernavaca.
In 1983 in New York the Mary-Anne Martin / Fine Art Gallery exhibited Ten artists from the Mexican Art Gallery, in which this work was included and from that date, they will do so regularly.
In 1993 he participated in ARCO with his galleries Mexican Art Gallery and Mary-Anne Martin / Fine Art.
In the autumn of 2011 was contemplating an exhibition  at the Freijo Gallery, due to his death the project was truncated; However, the desire to spread his work remains.